While giving praise where it is due: I continue this in-depth analysis with some more Problems: 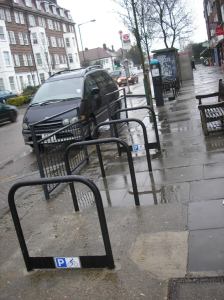 Mayor Johnson: “I do not control the vast majority of London’s roads, so many of the improvements I seek will take time. They will depend on the cooperation of others, such as the boroughs…”.

Indeed. After all, 95% of the roads in London are owned by the boroughs. This not just an excuse – although I believe TfL could apply more pressure on the boroughs to carry out a pro-cycling programme.

Regrettably, the boroughs do have to come under this list of Problems in assessing the likely effects of Mayor Johnson’s “Vision for Cycling in London”

There is a long history of local authorities in the UK that are not interested in cycling, or don’t “get” cycling in any meaningful way. This generally does not involve any specific hostility. But it does involve an agenda of prioritising motor vehicle use – well before “smoothing the traffic” became TfL’s mantra – in ways which will work against the prospects for cycling. They have a history of embracing “road safety” ideology, as opposed to the handful of Councils in London taking road danger reduction seriously instead, with all the associated problems for cyclists that flow from it.

And that’s just the specific departments concerned with transport policy. Officers concerned with “Regeneration” frequently have agendas based on accommodating or increasing motor traffic, as do housing departments. Even where some Councillors are committed to cycling, they have short terms of office in which to contend with others, even in their own political bloc, who may oppose them. They then have to work through the labyrinthine complexities of a Council bureaucracy. Even where senior officers are committed, it is quite usual for others in the hierarchy to impede their efforts.

There are particular problems relating to Cycle Training, Smarter Travel initiatives, and of course, “road safety” education, which I address in the next post.

But here I will list just a few instances of the kind of issues which come up in the boroughs which relate only to the everyday problems of those officers trying to progress cycling. These are based on conversations with fellow officers with whom I have discussed the current situation in the last few weeks. They are all in boroughs which claim to have a commitment towards supporting cycling – I haven’t even bothered with those Councils with a reputation for being anti-cycling (like Barnet, Newham, and Westminster). Identity is withheld to protect the innocent.

Borough A: There is no dedicated cycling officer because the official policy is “multi-modal” and cycling is supposedly included in it as a serious mode of transport. In principle this could be the right approach, but it does mean that the policy has to be genuinely non-discriminatory when it comes to cycling – and this is not so. My colleague has installed some segregated cycle facilities and wishes to continue doing this – but his/her boss is making this conditional on there being no loss of car parking spaces. This rather puts the damper on his/her ideas: so much for an equitable “multi-modal” approach.

Borough B: A “Biking Borough”, no less.

Borough C: The officer allocated with a cycling brief is subject by office colleagues  to continuous dismissal of the idea of cycling as a form of everyday transport. Cycling is not considered viable because (a) Women can’t do it because they will be sexually assaulted when cycling, and not just at night; (b) Motoring is far more accessible and always will be – and it is the duty of the Council to provide as much car parking and road space for cars as desired in order to accommodate it; (c) Cyclists are always riding on the pavement and through red lights so deserve what they get.

Elsewhere there are regular tales of difficulties in removing car parking from obstructing safe cycling (in cycle lanes or otherwise), a general opposition to any notion of sustainable transport policy, and ignorance or confusion about highway design guidelines. The London Cycle Design Standards are disseminated in seminars which a handful of borough officers have attended.

The fashion for extended footways with narrowed traffic lanes is hardly discussed in terms of its effects on cyclists. I’m not arguing against it here: I’m simply saying that a strategy which contradicts what many people mean by segregation – a word repeated numerous times in the Vision – needs to be prioerly discussed.

I could go on. And on. I am not trying to be negative, but this is the background which colleagues will find recognisable, and which members of the public (and Andrew Gilligan)  will not generally be aware of.

Of course, some Boroughs have a genuinely positive attitude which can win through – but even in these cases it will be a struggle. It all means that, if the enthusiasm evident from many commentators on the Vision is to be rewarded, that change needs to occur within the Boroughs.

How could this change happen? There is rather more to the relationship between TfL and the boroughs than the fact that TfL does not control the roads in them.  TfL give some £100 – £150 million every year to the boroughs in Local Implementation Plan settlement. While this money is for the boroughs to spend, TfL can, in principle, have an effect on the kind of spend which happens.

Indeed, a notable feature is how TfL has so far been likely to oppose measures which are seen as possibly reducing motor traffic capacity, even when a borough (for reasons such as increasing pedestrian signalled crossing time) has wanted to do so. And we see in the Vision that:

“We will not be asking boroughs to remove traffic or, in the vast majority of cases, change parking on the two-way cycle streets, unless they want to”.(p.11).

How about changing that to encouraging steps necessary to support cycling – which may well include reducing road space for motor traffic and car parking?

My suggestion is that, apart from assistance to a small proportion of Outer London boroughs (the “mini-Hollands”), which will only affect at best 15% of the part of London which is least attractive to cycling, that TfL actually restrict support to those boroughs that are not sufficiently supportive of cycling. It should be quite possible to reduce LIP settlements and other supporting programmes for boroughs if they don’t have a properly audited programme of support fro cycling. After all, support for cycling has been part of the Mayor’s Transport Strategy  (MTS) since the Livingstone mayoralty, with the aim of 5% modal share by 2026 continued in Mayor Johnson’s MTS 2.

In my view, if there is any chance of putting a positive vision for cycling into practice throughout London, this kind of change is going to have to happen.