The previous post has received an unusually high number of views for the RDRF site – this backs up our view that this is a crucial time for transport professionals and campaigners to be active. Please read the post if you haven’t as I am adding on developments using the same format.

There is a lot to read and discuss with colleagues:
(a) Some of this is “normal” transport news, relating to pre- lockdown.

There’s not much new here, although you might want to see the conclusions of Professor Glenn Lyons report on “driverless cars”

(b) Some of the news is COVID-19-related, referring to changes due to reductions in motor traffic.

The main areas of interest have been:

Air Quality (AQ): Better air quality is referred to here  by the ECF. This study Is on PM2.5s and COVID-19 ” A small increase in long-term exposure to PM2.5 leads to a large increase in COVID-19 death rate, with the magnitude of increase 20 times that observed for PM2.5 and all-cause mortality. The study results underscore the importance of continuing to enforce existing air pollution regulations to protect human health both during and after the COVID-19 crisis” but the connection could be correlation not causation – it does seem likely that it is nothing more than a population density issue. Another study links NO2 to COVID-19 .

Road Danger Reduction: Focus on the issue of “ultra-speeding” continues.

Picking on “out groups”: Regrettably cyclists continue to be targeted by unscrupulous photographers creating a false impression of close positioning with telephoto lenses. By comparison, there has been little or no focus on drivers not using their vehicles for necessary or permitted purposes.

Take a look at this and this article.
Also this piece.
And this on climate change .

And a repeat of a relevant cartoon.

I repeat these points:

“It is of the utmost importance that we defend the rights to walk, run and cycle for exercise. This is a public health crisis and keeping mental and physical health is crucial. Lack of the health benefits derived from walking, running and cycling are not just important in the long term, but well before then. Exaggerating the risks of cycling – “dangerising” it – is a staple of anti-cycling ideology.

Discussion about abuse of social distancing rules in open spaces and parks should not just involve investigating ways of getting compliance with the rules in such spaces (as it should), but on securing roads and streets with sufficient space to travel actively while maintaining social distance.”

Some obstacles. There are ways in which cycling could be properly supported here, but are not:
A. Provision of 1:1 cycle training to give confidence to returning cyclists. In London there are cycle trainers available whose schools/group training sessions have been cancelled, who could give properly distanced training. But because instructors are not classed as “key workers”, Transport for London cannot give the go ahead for this .My understanding is that loss of revenue from public transport is making TfL reluctant or unable to fund initiatives like this. This is something that central Government should address.
Do note that in the official Government guidance

“Key Workers” includes: “…those who will keep the air, water, road and rail passenger and freight transport modes operating during the COVID-19 response.” This could include cycle trainers, and certainly any workers needed for temporary/emergency measures on the highway.

B. Problems with bike theft for some NHS workers have received publicity on social media – this can be addressed by provision of secure and convenient cycle parking. There are developments in Enfield – but not elsewhere.There are difficulties with checking roadworthiness of unused bikes being pulled out of storage – but bike shops and cycle trainers can deal with this. I would have thought that Government could assist by financing socially-distanced Dr Bike sessions to assist returners to cycling. One development is this in Manchester .
C. General advice to returners to cycling. The cycling charities are trying to do this – but why should it be left to charities?
D. Secure and convenient cycle parking at home. Installing this requires local Government support and funding.

The one positive development apart from the London Mayor offering free  Santander hire bike use for NHS workers) in assisting key workers has come from cycling charities led by Sustrans.

This is so far the UK Government’s big failure.

Reducing road space available to motor vehicles in general and cars/vans in particular is required for the following reasons.

A. General carriageway narrowing. Reducing the amount of road space available to drivers is necessary to cut the ultra-speeding. Replicating the conditions of higher congestion intensity should also help to make drivers more careful. No new developments

B.  Temporary/emergency separated cycle lanes could be installed to protect key workers and others who are taking up cycling, as well as those who already cycle. I understand that there are concerns that simply installing such lanes could lead cyclists into a “false sense of confidence” when arriving at junctions. Junctions may well need more complex engineering and re-phasing of signals, but I would have thought that addressing this issue properly should not be impossible. My understanding is that last week one London Council is looking at achieving this with water-filled barriers, cones and possibly mini-planters.

C. Numerous posts on social media point out the difficulties of social distancing on excessively narrow footways. Why not emergency extension of footways at this time? One development is the DIY extension reported in the last post in Richmond-upon-Thames. Another one has appeared in Barnes, again without the Council being involved. 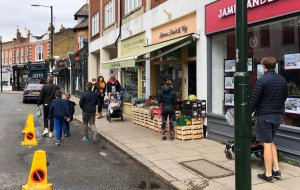 C. Filtered permeability to be rolled out. No new developments. There may be the obstacle that if changes to the highway are done under legislation relating to “temporary” measures that bollards cannot be installed. I would have thought that this matter could be addressed successfully. I understand that Hackney Council is considering rolling out existing programmes now. 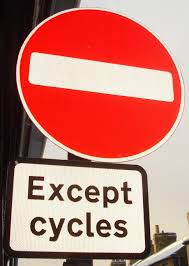 D. Changing pedestrian crossing light phasing to make crossing more convenient. I am unaware of any changes occurring in the UK. London Living Streets has listed this as one of the measures needed.

Let’s look at other countries first to get an idea of what we should be aiming for:

What’s happening in other countries?

The best thing to do is to check out the spreadsheet complied by Mike Lydon of Street Plans here.

I have picked up the following:
Berlin See the previous post: one of the few major cities in the world moving forward. 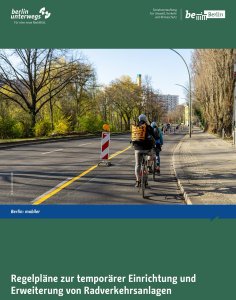 (see the tweets from @M_Chassignet to keep up with development

Milan The city has announced that 35km (22 miles) of streets will be transformed over the summer, with a rapid, experimental citywide expansion of cycling and walking space to protect residents as Covid-19 restrictions are lifted.

The relevant Minister , Julie-Ann Genter, announced on April 11th: “People need more space to move safely. Govt will provide funding for 90% of the cost to councils to roll out pop-up cycleways & footpath extensions after we move out of Alert level 4. Councils can apply to NZTA now.”

What’s happening in the UK?

The most important development – despite the optimistic raising of expectations in pieces like this  is just how little is being done.

On 14th April the Government released “Traffic Regulation Orders – Covid19 Guidance”  .
This has led to the idea expressed in this headline: Coronavirus: Banning cars made easier to aid social distancing.

It is, however, quite misleading. As Professor John Parkin states: “Don’t get over excited. All it does us reinterpret guidance on advertising TTROs, basically saying that for the time being they need not be advertised in the printed press, so long as other measures are taken as well to ensure good advertisement. We need much more than this.” And for the detail see this post  for how little difference it actually makes. Another announcement was made on 21st April: No change again on the basics, simply ways of doing necessary publicity on the schemes differently.

So lets see what has been done and might be on the way:
Birkenhead: Mersey Travel To assist key workers making essential journeys cross river, the Queensway (Birkenhead) Tunnel will temporarily be open to cyclists (14th April) although it already is outside rush hour and tolls for motors are suspended.
Brighton: This could be the first official restriction on motor vehicles in the UK because of COVID-19 (but see Portsmouth) . This is due to the hard work (on a voluntary basis) informing the local Highway Authority by Mark Strong of consultancy Transport Initiatives. 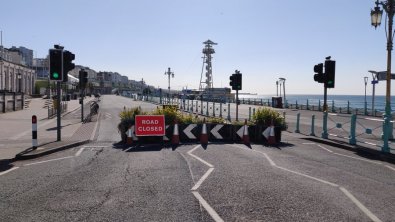 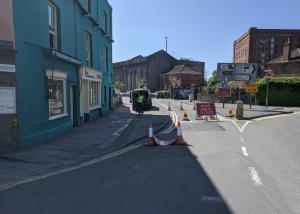 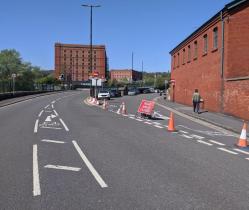 Cardiff :  20mph limit, restricted parking and a one way system to discourage trips by car in a key location. But this is still only at a park and “for exercise” as opposed to facilitating walking and cycling as modes of transport.
Glasgow: The relevant Councillor is “actively looking” at measures to re-allocate space for walking and cycling.
Manchester: Tib Street central Manchester has had two coned off lanes for walking/cycling.
I give you this quote from Chris Boardman: “ If you want people to stay apart and not use public transport, we have no choice but to protect, prioritise and enable those not driving.” That’s a quite we should be stating repeatedly to those in power.
And another one as he’s always worth listening to: “It’s particularly heartening to see these measures being implemented by the people who live there, telling us this is how they want their street to be.”
Portsmouth: Maybe the first road closure in the UK during COVID-19:  Seafront road is now closed at weekends as too many people were congregating, rather than to facilitate walking and cycling.
Richmond upon Thames (London) Barnes High Street SW13 The people involved say: ” Responding to public feedback, we’ve expended this initiative to other shopping parades. Cones have been moved a number of times to allow parking for blue budge holders. The Council are aware of the measures we’ve taken to allow residents to respect government guidelines.”

I’ll simply refer you to the previous post on this urgent matter as there have been no major changes since then. I still have concerns about some of the messaging – in our view road crime such as “ultra-speeding” is wrong and needs countering not because it can lead to extra strain being put on the NHS, but because it is dangerous crime threatening other people. Also, don’t forget to thank your local roads and traffic police when they are trying hard to stop road crime.
+++++++++

I can’t stress enough the need to push for genuine support for Active Travel at this time as part of a long term strategy for active and sustainable transport in the UK.

So far the UK’s record has been very poor. Hence the need for this letter, from cycling and walking organisations and a leading NHS trust, to the relevant Minister. 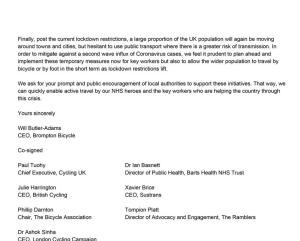 I understand an announcement will be made shortly by the Mayor of London’s Walking and Cycling Commissioner. So let’s hope for something happening this week. If we don’t start to see changes very soon the future looks bleak. 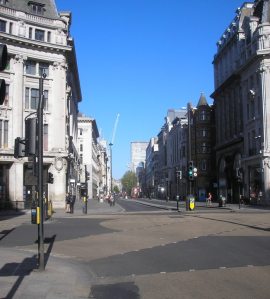 (Apologies for any inaccuracies – this is a rapidly changing world at the moment.Thanks to all those posting information)

2 thoughts on “Transport in the time of the Coronavirus crisis: what we need to do NOW. UPDATE 20th April”