What could be wrong with a campaign like this?. Well, quite a lot actually…

Run by Brake, it is supported by large numbers of “road safety” professionals and members of organisations with an official remit concerned with safety on the road: (schools, local authorities, police forces, emergency services) and various motoring organisations.  This year’s theme is : “Look out for each other”. Let’s look in detail at the core message: (My numbering)

“We all use roads to get around and most of us use them in different ways: often a mix of walking, catching the bus or driving, and maybe cycling, running or skating too. Of course, however we use roads, we are all people underneath just trying to get about, but some road users are especially vulnerable and need protecting by those of us in charge of vehicles. (1)

Yet sometimes it can feel like roads are angry places where different road users are in different tribes and competing for space and priority.(2) A simple lack of consideration and care can have awful consequences. (3) It can mean people feel less able to get out and about and less likely to choose walking and cycling: kids not being allowed to walk to school, commuters not feeling able to cycle, families being more inclined to always use the car. It can also lead to tragedy: people suffering horrific injuries or even being killed because of someone going too fast, too close or not looking out.

Wouldn’t it be better if, instead of being stressful and risky, streets were places where everyone looked out for and protected each other, particularly the most vulnerable?(1)

In this year’s Road Safety Week (17-23 November 2014), we’re asking everyone to look out for each other on roads, because being selfish can easily lead to tragedy. We’ll be particularly calling on drivers to protect people on foot and bike by slowing down to 20 in communities, looking longer and taking it slow at junctions and bends,(4) and giving people plenty of room. We’ll also call on everyone to put safety first and be considerate to one another,(3) encouraging people on foot and bike to never take chances (5), and make sure they can be seen (6).”

We’ll be appealing to everyone to show their commitment to care and compassion on roads by making and sharing Brake’s Pledge.

…and what’s wrong with it

1. This is essentially patronising   . Also, the idea that rule or law breaking which intimidates, hurts or kills can be dealt with by a polite request to “look out” for potential victims is rather strange. Can you imagine a Health and Safety regime in industry, aviation, the railways or sea travel which relied on such polite requests? Indeed, following the central theme of the “road safety” industry since it was founded in the 1920s, the fundamental difference in potential lethality between Primary Road Users (cyclists and pedestrians) and the motorised, is neutralised. We are all, as the saying goes, “in it together”. (“…we are all people underneath just trying to get about”). Of course we are. It’s just that some (the motorised) have far more potential to endanger others than those that are not.

This view is that the people who get about outside cars (incidentally, the majority of people in the world) are seen by definition as “vulnerable” and to be “protected” by those who have the potential to hurt or kill them. How about the idea that those with far more potential to hurt, kill or just intimidate (the motorised) are Dangerous Road Users to be seen as the problem?

2. “Different tribes”. As above, the point is exactly that there is a difference between people when they are using different forms of transport. The fact that people may also walk or (less likely) cycle does not mean that they pose no problem for pedestrians or cyclist safety when they drive.

3. For whom? Again, the fundamental difference between endangering others and endangering yourself is glossed over. And anyway, people have quite different ideas about what constitutes appropriate care and consideration.

4. The central rule of careful driving is: “Never drive in such a way that you cannot stop within visible distance” – which can include “…slowing down to 20 in communities, looking longer and taking it slow at junctions and bends”. But decades of “road safety” highway engineering based on lengthening sight lines, more powerful street and car lights and “road safety” vehicle engineering with more powerful brakes, anti-skid etc. have worked against this. Shifting the burden of responsibility to “be seen” on to pedestrians and cyclists actually makes it more difficult to achieve this basic requirement for safer driving.

5. What is meant here by “taking a chance”? And how on earth are we supposed to live in a world where we don’t ever take any kind of risk? Highways and cars have been engineered to accommodate “taking chances” – or to be more precise, rule and law breaking – by motorists for decades. Even without consideration of how this collusion and connivance with ”taking chances” has exacerbated bad driving behaviour, if we are to assume that drivers require a forgiving environment, why can’t pedestrians and cyclists have one?

6. This needs to be mentioned again as it is key to so much “road safety” ideology. The picture below of the ideal pedestrian presented to children trickles into the collective imagination of how we should behave when travelling is on the web site of one of Brake’s partners, 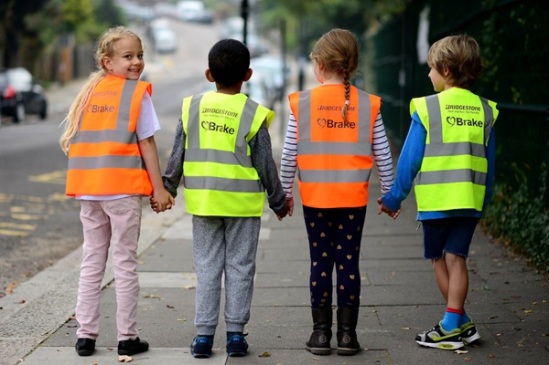 This slots into a belief system where responsibility from drivers is reduced and transferred on to their potential (or actual) victims. For cyclists and pedestrians to really “be seen” we need a reversal of this belief system, with enforcement, car and highway engineering which is based on a cultural shift to place responsibility back where it belongs.

Genuine “mutual respect” means leaving behind the “Evens Stevens” campaigns and reducing danger at source. Not threatening each other’s lives is the only real mutual respect.

(An aside: A case of how a safety benefit is consumed as a performance benefit.

Taking a look at the twitter account of one of Brake’s partners, Bridgestone, I note their commitment towards motorcycle racing. The photograph below is a classic example of how “safe” technology (in tyre design and construction) allows people to take additional risk –

After all, could you corner at speed like this on a normal motorcycle tyre?)

Brake mentions a commitment towards sustainable transport. Indeed, one of the promises made in their Pledge is to drive less. But what actually works? A voluntary pledge which a tiny minority of motorists make while Government (funding Road Safety Week through the “Think!” campaign) plans more road building for more cars? While even a very large number of committed pledgers would be offset by far more who simply don’t want to drive less and are facilitated in driving more?

And do we think that the world’s largest tyre manufacturer would finance a campaign likely to result in less motoring?

Brake is long term supporters of campaigns for compulsory bicycle crash helmet wear . It both denies relevant evidence and replicates helmet mythology.  Of course, Brake claim to be campaigning to create a “safer environment for cyclists” – but what do we actually get?

What we get is not a “safer environment for cyclists” – whether through law enforcement, highway or vehicle engineering – and I suggest that any efforts which may be made in these directions are the results of others than Brake. What we have had is a relentless push to make pedestrians and cyclists wear hi-viz, and cyclists war crash helmets.

Brake is very effective at public relations and getting corporate sponsors on board. Some of the funding gained goes towards providing road crash victims support services. In our experience our friends in RoadPeace  provide a more in-depth victim support service, with detailed study of the post-collision processes, and of course a commitment towards road danger reduction.

So, if you want to get involved with activities at this time, we would suggest supporting RoadPeace with the World Day of Remembrance for Road Traffic Victims with its campaign to reduce motor traffic speed

Safety for all road users with a more sustainable transport system requires shifts in culture and attitudes to support (and be supported by) specific interventions. That means focusing on reducing danger at source – danger from motorised vehicular traffic. Brake consistently fails to do this, obscuring differences in the potential lethality of different modes of transport and regurgitating the (non-evidence based) mythology of hi-viz and cycle helmets.

We think that Brake and its partners are very much part of the problem of danger on the road.

Following disquiet amongst cycling groups, re-tweeting of this web site link (thanks everybody, especially @Copenhagenize ), BikeBiz contacted Brake who responded here : See also Brake’s comment in the comments section below.

Here is the BikeBiz interview: our comments on Brake’s answers to BikeBiz are in blue font

BikeBiz: So, is Road Safety Week putting the emphasis on road safety solely on vulnerable road users like cyclists and pedestrians? Philip Goose: Our Road Safety Week campaign is quite the opposite – we recognise that 4% of miles travelled in the UK are made on foot or bike, but vulnerable road users make up almost half of road deaths. Up to 95% of crashes are caused by driver error, so it is therefore vital that drivers take responsibility to protect themselves and everyone around them.

PG: As part of Road Safety Week we are also campaigning for 20mph limits as the default urban speed limit. It is proven that every 1mph reduction in average speeds causes on average a 5% reduction in crash rates – and that is only one benefit.

PG: We are also fully behind increased funding for infrastructure to make sustainable transport safer and more attractive. Through two of our recent surveys we know that three in four schoolchildren wanted to walk or cycle more, and another showed that a third of non-cyclists would cycle if routes were safer.

In summary, BikeBiz wasted an opportunity to question Brake about the key issues we raised. In particular, the “Evens Stevens” approach of “Look Out for Each Other” was not questioned. Nor were the lack of evidence behind, or general implications of, Brake’s campaigns for cyclist and pedestrian hi-viz wearing and cyclist helmet wearing.

www.rdrf.org.uk has had one of its busiest days ever due to visits to this page. We intend to carry on criticising the “road safety” industry for failing to work towards the civilised approach to road safety we require to achieve “Safe Roads for All”: Road Danger Reduction, reducing danger on the road at source.

20 thoughts on “Road Safety Week: What’s wrong with it?”