First, a confession: I am a cycle sport nut. I used to be a keen racer (albeit to no significant effect in terms of results), have a much repeated link with England’s greatest ever road racing cyclist , and frequently take part in sportives and Audax events. I jointly runt he annual Hammersmith Cyclists Film Show for cycle sport fans. I watch all the main races and fret over the minutiae of transfers, alleged drug taking, fancy new equipment etc. on the sport web sites. I shall immerse myself in the magic as the Tour de France passes my east London vantage point.

However, there is a view that The Tour de France and cycle sport generally are associated with a supposed big increase in everyday cycling: let’s just talk it all up and we’re on our way. I think there are issues about the difference between cycle sport and everyday cycling, about negative features of cycle sport and the image of “cycling” which we need to look at. So, when you take a break from the excitement, you may wish to consider the following:

Sport is, well, sport. Cycling as a form of everyday transport – for ordinary people wearing ordinary clothes to make ordinary journeys for ordinary everyday purposes of shopping, working, education, visiting people in their communities – is what I am more concerned with. It is that which justifies social and political support for, among other things, mass allocation of resources.

Cycling as transport is a key element – probably the key element – in dealing with the problems of an unsustainable system centred on excessive car and road freight usage. Cycling as transport is particularly under-represented in the UK compared to similar kinds of society in northern Europe. Cycling as transport is necessary for increased health of the users of the mode, reducing danger to other road users, noxious and greenhouse gas emissions, visual intrusion, noise pollution, destruction of rural and urban environments through road building and increased or stabilised levels of motor traffic, costs of road building, and the loss of local community.

Cycle sport is something else: some people move from it to use cycling as a form of transport, and vice versa. I have, but many don’t. Plenty of racing cyclists are locked into car usage for most journeys (including to and from bike races). Even if a “Wiggins effect” bolsters numbers of active sporting cyclists to, for example, French levels, we are unlikely to have more than a fraction of 1% of journeys made by them. A lot of the people who get into cycle sport would have been doing some form of sport anyway, so the health benefits for the people doing it may be small anyway.

And then some key groups who may become the “utility” cyclists of tomorrow may be actually be put off by muscular young men with specialist clothing and equipment. There is a small change with the (slightly) increased profile of women’s racing – but then the women who feature in mass cycling countries are not there because of the influence of women sporting cyclists, any more than they are trying to emulate male racers.

With a love of cycle racing comes an acceptance of crashing. (Minute remnants of my skin are no doubt lodged in the debris of the Eastway cycle circuit which was destroyed to make way for the Olympic Velodrome). In the 2012 Tour de France, I calculated that of the 45 withdrawals at least 20 were due to sustaining what in road safety we classify as “Serious Injury” (SI) (That does not include Geraint Thomas racing with a fractured pelvis) That’s about 10% of all the riders over the three weeks. Although that year may well have been worse than previous ones, these injuries happened in a period of some 90 hours, equivalent to about 4 months of typical commuting for an urban cyclist.

To translate that into London cycling terms, that would result in some 25% of cyclists being seriously injured every year – about 65,000. Instead there are some 400 – about 150 times fewer. Even allowing for non-reporting, we have a difference of dozens, if not a hundred times fewer. If we used the (I think less valid) exposure measure of distance, it would still be the case that tour de France riders are far, far more likely to suffer SI than people cycling in London.

What Bradley Wiggins and the cream of racing cyclists do to become role models is, as only a few have pointed out, far more hazardous than urban UK cycling, at least the London version of it.

It is, unlike cycling as a basic mode of transport, inherently hazardous. 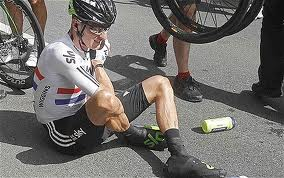 You may wish to do some calculations of your own: lists of withdrawals with reference to crashes are publicised, so the data is quite good. You can also see the equivalent of road safety’s “Slight Injuries” by looking at the crashes shown on television which don’t result in the more severe injuries.

Compare the injury rates (with time as the unit of exposure) to London or other locations – London is best because of better information, particularly on cyclist exposure levels. To do this count up the numbers of riders still in the race, use 40 kph as a rough indicator of average speed (the time given at the end of each day is for the first over the line), and the length of distance over a given stage. Add up after three weeks and voila!

There is another key feature of cycle sport’s inherently hazardous nature. Sometimes it is pointed out that this high injury rate happens despite the racers having:
• The best maintained equipment
• The highest level of bike handling skill
• A commitment to avoiding crashes – crashes reduce the chances of getting to the finish line quickly, and sustaining injury requires time and energy to recover.
• High quality emergency care immediately available
• Excellent quality physiotherapy and massage care for injury.
• The latest bicycle crash helmets, expertly fitted
• Information on race radio about hazards on the course
• Awareness of the parcours layout based on careful study of each stage, including speed humps and other street furniture.
• An absence of motor traffic: there are motor vehicles on the course, but only a small proportion of incidents involve them.
• Fewer problems from errant pedestrians. There are incidents, as there are millions of spectators – but most are aware of the presence of the race in a way in which typical pedestrians in urban areas are not aware of cycle traffic.

In fact I suggest that it is actually wrong to say that the high injury rate happens despite the racers having these “safety aids” and other features. It happens, at least in part, because they have them. Risk compensation/behavioural adaptation theory has time and again shown how safety benefits are consumed as performance benefits. The Tour de France and high-level cycle racing are no exception. 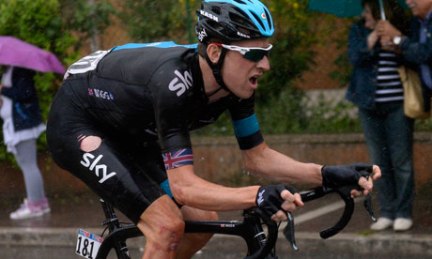 Does it matter? Yes, I think it does.
Cycle sport fans inevitably use the word “cycling” based on cycle sport, and everyday cycling is supposed to slot into that conception of cycling.
“Cycling” is inevitably seen as being inherently hazardous. If the images of “cycling” and “cyclist” are of “cyclists” crashing and hurting themselves, that’s bad. It distorts discussion of issues like cycle helmets and is just plain misleading and negative.

As I have mentioned before,  people basing their views on their experience as bike racers are not good role models for everyday cycling. From the way they get about, to their tendency to adhere to a subservient notion of cyclists’ place in the transport system, cycle racers – the latest is Sir Chris Hoy  – don’t tend to get it right. Indeed, the saintly Chris Boardman who (with the exception of an ill-advised appearance on Top Gear) almost always gets it spot on, is the exception that proves the rule. And he has made it clear that he is interested in everyday cycling, and would trade his Olympic success for success on that front.

Chris Boardman (Photo road.cc). Normally he isn’t smiling when he comments on everyday cycling because he knows what’s going on.

So what does happen?

The mantra is that “cycling is popular in the UK”  I do see lots of sporting cyclists out on my training bashes, but apart from London and one or two other places, cycling has not been taking off as a significant form of everyday transport. There was no increase, even including leisure cycling, between 2011/2012 and 2012/2013

The brutal truth is not just that the fantastic success of Team Sky and Team GB has not led to a move towards cycling getting above a 1-2% national modal share. It is not even that there are minimal benefits from cycle sport feeding in to cycling as transport. It is that there are significant negative elements, particularly its association with crashing, that exist.
None of that stops me from saying: “Vive le Tour! Bonne route, bon courage et chapeau aux coureurs!”. But I do think it is something to consider.

6 thoughts on “Will the Tour de France be good for cycling in the UK?”