2017 has seen two important steps forward for Road Danger Reduction (RDR) in the UK. But the transport status quo is still stacked against sustainable/healthy travel policy and the gains can easily be rolled back. So let’s have a look at what has happened to get RDR on the agenda – and what needs to be done to keep it there and push it further.

Firstly, our friends in West Midlands Police have had more publicity for their work on policing close passing of cyclists and related policing, such as of 20 mph limits. We helped them with me giving a key note talk at their January training day.

I am pleased to be in constant touch with the two PCs whom we awarded the special award to in November 2016. We – Ken Spence, Colin McKenzie and I – then jointly organised a very well attended training day for police officers in September.

Most significantly, they have been organised into the West Midlands Road Traffic Harm Reduction Team (“Harm Reduction” is the Police equivalent of “Danger Reduction”). RDRF are acting as the Secretariat for WMP on close passing policing by collecting and disseminating information to police forces in the UK interested in this kind of policing. We also supported the launch of the Metropolitan Police’s close passing of cyclists policing.

This was the year when Third Party reporting of bad driving – a crucial part of Harm Reduction policing – got itself firmly on the agenda. I attended the launch of Operation Snap in Wales: will the public take to submitting footage of law breaking motoring? And will UK Police Services act on these submissions in ways which help to deter bad driving?

Regrettably, talking about RDR has sometimes been just that – talking. RDR has been slotted in to documents replacing some usage of the phrase “road safety” while the approach stays the same.

So while the above are both big steps forward for the RDR agenda, there are signs that some police forces and local authorities just want to go through the motions on RDR. We will need to be vigilant and work with them to make sure that a genuine RDR approach is taken.

Getting the message across

I have been active with the http://www.rdrf.org.uk  blog and our Twitter account #CHAIRRDRF. I have spoken on harm reduction policing at conferences in Westminster, Hackney, and Bradford; and on road danger reduction in London at Waltham Forest. I was also privileged to give a welcoming talk to the 25th anniversary AGM of our friends RoadPeace.

I was interviewed twice on radio after the Alliston/Briggs case: we had over 11,000 views for the first of our posts on the case. Regrettably this case was exploited by all too many with an utterly hypocritical pseudo-concern for pedestrian safety. We saw it as necessary to show up the double standards as part of our aim of getting proper safety and traffic justice for pedestrians. We are continuing to show the failings in current official approaches to law breaking  and sentencing.

I have also attended the Action on Lorry Danger working group and Brenda Puech represented RDRF at an important conference in Gothenburg on safer Lorries (paid for by the hosts Volvo Trucks). If Volvo thought they could get a compliant audience they were mistaken and got a lot of pressure from Brenda and the NGOs representing cyclists and pedestrians who pushed – we hope with success – for them to be swifter in bringing in safer lorry designs with Direct Vision.

Most importantly, we are reconstituting the RDRF with a new constitution and committee to enable us to be more pro-active in the New Year. As well as continuing our work on close passing policing we intend to extend the work we do with a conference (probably with our friends in RoadPeace) and offering to train transport professionals and the police and audit their work on RDR. Our work will be supported by a fundraising initiative and our committee members have determined to give more time to the cause.

So watch out for those fundraising requests in the New Year!

What we’re up against

Just to remind you: This year’s Budget saw the Chancellor proudly proclaiming yet more money given to drivers. We are one of the few organisations that question the continued subsidy to motoring. We question the equation of fewer deaths with “more safety”. We push for traffic justice.

To give just one (minor) example of our work , take this crash in east London: I am trying to find out what happened after this incident (the first one in the story here ) where a cyclist was hit by a bus where the driver was clearly in the wrong – overtaking on wrong side of the road straight into cyclist. 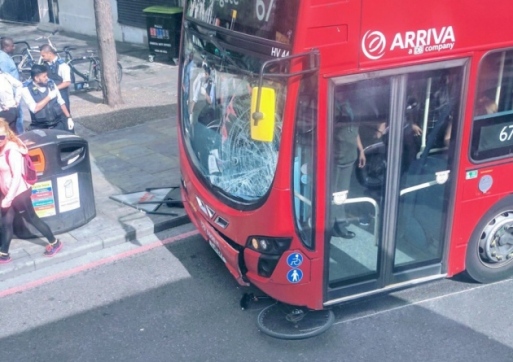 There was no arrest at the time in July and no mention of the incident was made in the TfL quarterly bus accident reports. Working out what happened as a way of reducing the danger that leads to such incidents is just a small part of what we are about.

We hope you will be with us as we continue our work in 2018.