For us the highlight of 2016 – and indeed for a longer period – is the policing of close passing of cyclists by West Midlands police , to be followed by similar policing by Camden MPS, and our award recognising this work. While, in itself, the enforcement exercise of “Give Space: Be Safe” won’t make a difference for the average cyclist in the UK, it is noteworthy for a number of reasons.  As we say in the post, this policing recognises:

(a)  The fundamental difference in the effects on others of errant behaviour  by drivers on the one hand and cyclists on the other, and accordingly focusing on the driver misbehaviour.

(b)  That behaviour which is intimidatory and deters potential cyclists from cycling – in this case close passing/overtaking – is worth addressing even if it is not just linked to causation of Killed and Seriously Injured casualties.

In other words, both approaches take a “harm-reduction” – or as we would say, danger reduction – approach. The award event at the House of Lords was packed out by campaigners, transport professionals and police officers. Cycling UK have referred to “Give Space: Be Safe” as “the best cyclist safety initiative by any police force, ever”

What is “road danger reduction”?

Elsewhere we note an increasing use of the phrase “road danger reduction”. There is a Road Danger Reduction Manger at City of London, as well as the RDR Officer at LB Lambeth. However, sometimes the phrase is used in ways which are not the same as intended when RDRF was set up. We will be in contact with those claiming to support RDR offering support and hoping for them to sign up to the Road Danger Reduction Charter.

As with “sustainable transport policy”  many supposed adherents do not , in fact, support what it says on the tin. We will point out to them where they differ from what we advocate – but ultimately there will be difficulties in us policing what is meant by “road danger reduction”. To assist clarity, watch out for further definitions of “road danger reduction” from us – the founders of the phrase – in 2017

We, and our supporters, are still here! Sometimes seen as solipsistic – just talking to ourselves – the world of Twitter and this website can be limited. But it gives us a chance for the like-minded to support each other. In particular, we would single out @beztweets and beyondthekerb.org.uk  for informative reading. (A favourite for me is how crashes caused by motorists seem to be reported without any driver agency apparent – but not so with crashes involving cyclists)

The bottom line is that we still have a government committed to increasing car dependence with road building for more motor traffic. Car use has become cheaper and the sustainable modes, particularly cycling, languish compared to many similar countries in (northern) Europe.

Above all, we still have the dead hand of the “road safety” establishment. As regular readers know, we have pointed out in great detail how we think it has been part of the problem of danger on the road: failing to address danger at source, exacerbating much bad driving through accommodating it by vehicle and highway design, and victim-blaming users of the less dangerous modes. The fact that this is on often practiced with the best of intentions doesn’t excuse it, indeed makes it less acceptable.

If it TAKES one life…

At the end of December in the UK we have had two high profile crashes occurring in foggy conditions: the A40 crash on 28th killing one person, and a coach overturning on 30th. Of course, we don’t know the exact chain of events leading to these incidents, and it is quite possible that sudden changes in conditions may have it difficult for even the most careful driver to avoid crashing. Nevertheless, it is commonly accepted that collisions in such foggy conditions often occur because drivers drive too fast for the conditions.

In short, they have not obeyed the most basic rule: “Never drive in such a way that you cannot stop in visible distance”. 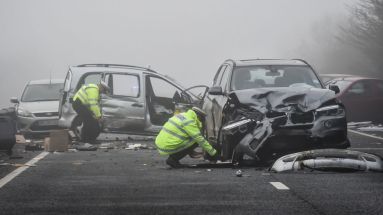 A Thames Valley Police collision investigator takes notes by damaged vehicles on the A40 near Witney, Oxfordshire, after a woman died following a pile-up which involved around 20 vehicles. (Sky News)

Our take on this is that one of the reasons why this kind of rule infraction happens is precisely because of efforts of the “road safety” establishment. We are relentlessly bombarded with the “road safety” industry’s attempts to get the potential victims of drivers to “be seen” (for a recent example see this post , otherwise the posts over the years under “Conspicuity”). Highway engineers have spent generations increasing sight lines: in general, the mood has often been to accommodate not watching out for potential hazards.

Popular culture takes the lead from this shifting of responsibility away from the driver. Consider how The Times twitter feed reported the coach incident, at 1.20 pm on December 30th: “17 people are left injured after thick fog caused a coach to overturn” (my emphasis). Fortunately plenty of twitter followers were keen to point out that the agency of the driver has been missed out and effectively excused, even if responsible.

We will continue to p0int out  this, and other examples of “road safety” being part of the problem as we believe it is necessary if we are going to have a civilised approach to danger on the road.

So here’s a thought: often, when we complain about the victim-blaming, non-evidence based approach of campaigns such as those to get pedestrians to wear hi-viz, we hear the phrase “if it saves only one life, it will have been worth it”. In fact, the “road safety” industry likes to claim exaggerated) large numbers for its interventions, but let’s consider the sentiment.

The fact is that in the road danger reduction movement we think that shifting responsibility away from drivers contributes to road danger. Exactly how the effect works through is difficult to tell – changes in culture and behaviour across societies are subtle and intangible – but definite nevertheless. So our retort, based on assessment that danger may have been exacerbated is: “if it takes only one life, it should have been opposed”.

We continue our work into 2017. Thanks to our supporters, and we renew our commitment to assisting those trying to tackle danger on the road at source.