In February 2014 the Road Danger Reduction Forum, along with the London Cycling Campaign; CTC: the national cycling charity; RoadPeace: the national charity for road crash victims; and TABS: the Association of Bikeability Schemes came together to explain our concerns to, and ask for action from, Transport for London.  Last week we received a reply from TfL (see below). Because we think that this reply misunderstood the basis of our concerns, our organisations sent a reply today repeating them and suggesting ways forward, as follows:

This is the kind of thing we are concerned about: 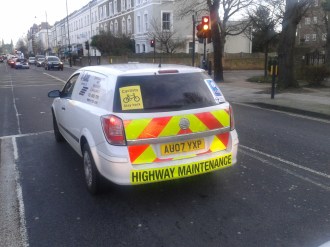 and here is the TfL response we are replying to:

140408cycliststaybackstickeRECAPRIL22
The RDRF view is that a sensible initiative – the warning to cyclists to avoid overtaking and being the nearside of lorries about to move or turn left – has been mishandled in the ways the organisations above have described. Hopefully TfL will listen to these concerns now. As important, we hope TfL will consult with its partners and stakeholders who have a concern with danger reduction and think properly through future schemes.

2 thoughts on “Inadequate reply from TfL over “Cyclists stay back” stickers.”