We have already given first impressions on the Government response to the “Get Britain Cycling” report .  After the dust has settled from the Parliamentary debate on the report, it’s time to take stock. The bitter truth is that there is a contradiction between Government pro-cycling rhetoric and what it is actually prepared to support, with fundamental ideological and institutional barriers in place to prevent genuine support for cycling.

It’s gratifying to see that 100 MPs turned up to the debate, with support given to the Get Britain Cycling report:

The debate ended with an unopposed vote in favour of the motion “That this House supports the recommendations of the All-Party Parliamentary Cycling Group’s report ‘Get Britain Cycling’; endorses the target of 10 per cent of all journeys being made by bike by 2025, and 25 per cent by 2050; and calls on the Government to show strong political leadership, including an annual Cycling Action Plan and sustained funding for cycling.”

But as the CTC put it: “Unfortunately the vote is not binding on the Government!”

It may seem churlish, but I have been listening to government ministers proclaiming their support for cycling since 1984, since when we have witnessed a massive increase in – motoring.

Lots of positive  (and, it has to be said, some misguided) contributions in a debate may well assist further pushes for cycling as part of sustainable transport policy and reducing road danger. To be part of that push I joined the cyclists in the demonstration that London Cycling Campaign organised outside while the debate occurred: 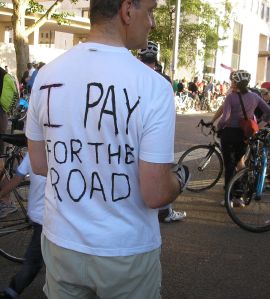 SO WHERE IS THE GOVERNMENT WITH REGARD TO CYCLING?

Professionals and campaigners are used to central Government going on about the importance of the local in making decisions. In effect this tends to mean that:

(a)  Responsibility and necessary support for sustainable transport is shifted away from those who have the real power and resources.

(b)  Where local decisions are made in a progressive way, pressure from the centre – despite the rhetoric of localism – will tend to minimise their prospects of success.

Probably the most obvious area of failure, this needs looking at in a little more detail.

Commentators on the Government response to “Get Britain Cycling” have highlighted the fact that the minimal investment in cycling is for limited periods in limited areas. This is in strong and stark contrast to the amounts of money put in to promoting motor vehicle transport (this is what “investing in roads” generally means). It is in strong contrast to the long and sustained time periods of pumping money into building infrastructure for cars and lorries. For example, in their typically super-polite way, the CTC point out:

“CTC and other cycling groups welcomed the Prime Minister’s support for cycling and his effective endorsement of the figure of £10 per head of annual spending on cycling. CTC has long regarded this as the minimum needed to start catching up with continental levels of cycle use.  However CTC also pointed out that his actual spending commitment covers just 1/10 of Britain’s population for 2 years, (my emphasis) and that substantially increased funding is now needed for several years, if local authorities and others are to develop the organisational capacity, the funding programmes and the cycle networks needed to substantially boost cycle use over the longer term.”

But it gets worse. This should all be looked at in the context of  the Government’s pro-car and pro-lorry road building . And also the promotion of the £42 billion High Speed Rail Two.

It can also be looked at in the context of items which tend to slip under the radar. For example, this year the £500 million donation by our Government  (admittedly over ten years) to the automotive industry to, well, help it. So much for leaving things to the market.

Or what about the cancellation of the fuel tax accelerator in the last budget? By cancelling the pathetically small 3p per litre increase, the Government saved a typical motorist some £20 per annum – the equivalent of some 40 miles’ driving costs. That lost the exchequer some £500 million per annum – exactly the sort of sum which has been agreed to be necessary for ring-fenced cycling funding.

And, yes, it gets even worse. For, as we have pointed out for some time in posts such as this and  on the costs of motoring, there is a general problem with the cheapness of motoring. Against the background of rising costs of essentials such as housing, even before this Government, motoring costs have remained stable or declined.

Then there are issues about how fuel-efficient cars are hardly likely to become attractive until fuel costs rise or fuel is rationed.

In addition, it might be worth comparing the cost of cycling with that of driving. Bodies like the CTC and LCC have long argued for allowances of some 25p per mile for cycling – yet motoring can cost a fuel-efficient car driver less than twice that. A couple may find it cheaper to sit in a car than cycle together – what kind of message is that’s ending out?

Just in case you need any reminding of how this Government allocates funding on local transport schemes, take a look at this report by Campaign for Better Transport and CPRE.

Are you in any doubt that, in terms of allocation of financial resources, this Government massively discriminates against sustainable transport in general and cycling in particular?

The lack of motoring law enforcement, and the leniency and lack of deterrence in sentencing, are key indicators of inadequate concern for the safety of cyclists – although this is just part of a general problem for all road users, with those outside cars simply being more at risk.

The one move made by the Government in response to “Get Britain Cycling”  is discussed under point 11.

Early in the New Year, the Sentencing Council (an independent non­-departmental public body of the Ministry of Justice) will undertake a review of the sentencing guidelines for the offences of causing death by careless driving and causing death or serious injury by dangerous driving.

In other words, the vast majority of driving resulting in serious injury won’t be discussed (because it involves “careless” rather than “dangerous” driving). You can forget about the vast majority of injuries (classified as “slight”), let alone intimidatory behaviour or bad driving in general. Nothing about speeding or the debate on “presumed liability” – this has already been opposed by Minister Norman Baker. Nor the levels of law enforcement required to actually achieve necessary change.

All of this is underpinned by a car-centric, car-supremacist culture. There is no point arguing for changes  – in law and its enforcement, engineering, education etc. – without a recognition of the role of this culture. Without it we don’t realise the reasons for replacing car use by sustainable modes such as cycling. Without it we don’t appreciate what barriers the necessary means to support cycling have to overcome.

The whole point about culture is that it is about what we don’t talk about. It is about how we regard as unproblematic matters which, if we are going to make the necessary changes, we have to start questioning. That isn’t happening with the present Government.

SO HOW ANTI-CYCLING IS THIS GOVERNMENT?

Plenty of MPs in the parties forming the coalition, particularly the excellent Julian Huppert for the Lib Dems, are saying the right kinds of thing. And there are distinct prospects of progress on cycling in London, with funding which (indirectly) comes from central Government.

But for the Government itself, in terms of real progress towards a proper approach to cycling as part of a civilised transport policy? My view is that it is fundamentally discriminatory against cycling as a viable everyday form of transport. It does not properly address road danger to cyclists (and other road users) or challenge negative and stigmatising portrayal of cyclists. It gives grossly inadequate and inequitable funding to, and general provision for, cycling compared with other forms of transport and car use in particular.

In the next post we are going to look at whether the opposition is putting forward any programme which would be better.

1 thought on “Just how anti-cycling is this Government?”