No, I’m not saying Lewis Hamilton is a Nazi. Nor that Mercedes-Benz are (not now anyway). Nor that the “road safety” lobby is Nazi. I’m not, really I am not. I am not falling foul of  Godwin’s Law. I promise.

There are just some interesting connections between the four of them which I noted after my eye fell on the following Press Release (from 2009) and which I think are revealing: “Lewis Hamilton has launched a new initiative at Mercedes-Benz World to give teenagers a greater understanding of road safety.”    Linked in with the main global initiative for “road safety”, this is another example of the dangerous nonsense which sends out the opposite of the messages we need to present to achieve real road safety. Just in case you think this is a wildly radical sentiment, consider the following from the Chief leader writer of the Daily Telegraph:  ”Are these really the chaps to persuade boy racers to slow down? Whatever next? A new crackdown on violent crime, with Peter Sutcliffe and Donald Neilson in attendance?”.

As David Hughes says:”Just one niggling little problem. I can’t think of worse role models for safe drivers than these two speedsters“.  Hamilton’s record is:

2.  In June 2009 he appeared to have repented, and in an earlier version of one of these “road safety” stunts said  there was “nothing cool” about speeding.   He said: “Everyone has made mistakes including even myself, but you learn from those. “You could easily make such a mistake and lose your friends or lose your own life.”

3. Reckless driving in Australia in March 2010 – charged with improper use of a vehicle and he accepted guilt.

4.  In June 2010 the Swiss foundation for victims of road accidents RoadCross (the Swiss equivalent of RoadPeace) condemned both Hamilton and his singer girlfriend Nicole Scherzinger, who has recorded a song called “Baby can’t drive”, for their unruly driving. According to RoadCross, the Pussycat Dolls singer told British tabloid newspaper the Sun that Swiss authorities would no doubt expel the couple from Switzerland if they knew how fast they had driven in the country. RoadCross said that Lewis Hamilton had already caused an accident in March 2009, because of his “irresponsible way of driving”. The Formula One driver hadn’t respected a stop road sign and had hit the car of a woman and her child; no one was injured.

5.  About his Formula One racing, former ace Niki Lauda says: “He is completely mad….You cannot drive like this — as it will result in someone getting killed.”   . . What he does off-road should not concern us: the only people like to suffer are – unlike ordinary road users – those who have chosen to put themselves in a hazardous position. And the advanced “safety” engineering on race cars and circuits means that they won’t have to worry too much, unlike in Lauda’s day – which is why Hamilton and others can get away with what they get up to. It does, however, send an interesting message out if he is selected as a role model for “road safety” programmes.

So, back to the Press Release:

“The Mercedes-Benz Driving Academy has developed the RoadSense (sic)  scheme, which offers children as young as 14 the chance to enhance their learning of road safety through hands-on driving experience.Wilfried Steffen, President and CEO of Mercedes-Benz UK, said: “RoadSense is a great initiative to teach the basics of road safety to teenagers. It highlights the responsibility that even non-drivers have to make the roads a safer place. (It’s very sweet of him to consider that the vast majority of people on the worlds’ roads have something to say about safety on the roads, isn’t it?)

“Working with schools to offer this as an add-on to the school curriculum will mean that when pupils start to drive or be driven by their friends they have developed a responsible attitude towards driving.”

This is interesting because one of the few reliable pieces of evidence most road safety professionals agree on is that what is referred to as “pre-driver training” most emphatically does not result in lower chances of crash involvement for those who have it. This is because  it encourages them to drive earlier, boosts their confidence (one of the most dangerous things you can do with a young driver) and – insofar as any real road safety message is imparted – fails to deliver on this in the way that almost all “road safety education” fails to transform behaviour.

Meanwhile, Mercedes-Benz World also offers young drivers the chance to prepare early for their driving test through the Kids’ Driving Experience. Children of all ages, as long as they can reach the pedals of a Mercedes-Benz A-Class (my emphasis), can learn everything from simple car controls to skid management.

Before you think that this is some aberration, remember that the UK Prime Minister welcomed Hamilton (and Jenson Button)  to Downing Street to launch the dreadful UN Decade of Road Safety: this nonsense is part of mainstrean “road safety” ideology. It has been supported by the Surrey Police , who should of course be out enforcing highway law.

Everybody has seen pictures of Hitler in Daimler-Benz cars, and obviously the company functioned under the Nazis. However, the company history that was put out in 1986 for the 100th anniversary of the first Daimler and Benz cars gave the official line was that ”Daimler-Benz supported the National Socialist regime only to an unavoidable extent for a company of its importance.” No research was permitted in the company’s archives about the labor force during the Nazi period. And there was a lot more to it than the official line suggested.

“Mercedes in Peace and War: German Automobile Workers, 1903-1945” byBernard P. Bellon ( Columbia University Press) gives  ” a chilling account of how the great automobile and arms maker prospered on the backs of its workers, including the use of thousands of concentration camp slave laborers right up to the final days of the Third Reich. After its own official history came out, the company relented and opened its archives. Several German historians interceded on behalf of the author of this book, Bernard P. Bellon, who at the end of 1986 was permitted to examine the company’s closed records. Mr. Bellon is assistant professor of history at the Georgia Institute of Technology and a fellow of the Berlin Program for Advanced German and European Studies at the Free University in Berlin.” “Leading managers of Daimler-Benz lent valuable assistance to the National Socialists before Hitler became Chancellor in 1933,” Mr. Bellon writes. ”The corporation even claimed that it was responsible for ‘helping to motorize the movement.’ ” One way the company aided Hitler’s party was to take out large advertisements as early as 1931 in the Nazi newspaper, the Volkischer Beobachter, known for its virulent propaganda and anti-Semitic tirades. The author believes that the ads may have been part of a quid pro quo arrangement under which Daimler-Benz cars were given or lent to Hitler and his party’s officials.” 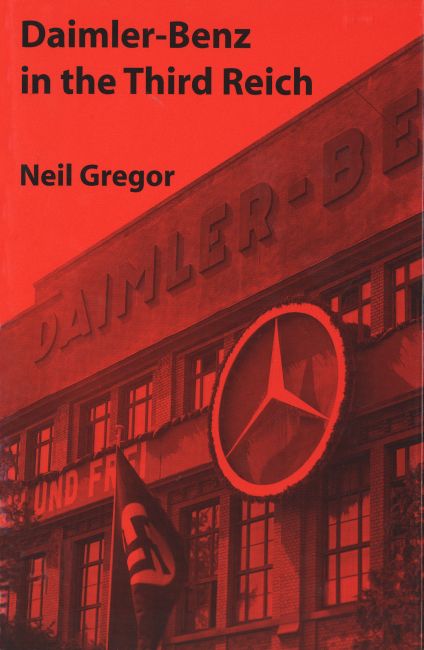 Neil Gregor’s “Daimler Benz in the Third Reich” traces the early history of the Daimler-Benz company and examines how opportunities offered by Nazi rearmament in the 1930s led to its rapid expansion and a surge in profits. Focusing mainly on the war years, Gregor demonstrates how the company succeeded in exploiting the demands of the war economy while situating its operations most advantageously for resumption of commercial activity in peacetime. Despite Allied bombing, says Gregor, Daimler-Benz AG emerged from the war in good shape—with a clear operating strategy, a largely intact inventory, and core production lines geared for the peacetime market. With its own interests and preservation as prime motives, the company acquiesced in the exploitation of forced labour, thereby actively intensifying the suffering of civilians, prisoners of war, and Jews and other victims of concentration camps. He concludes that the ability of Daimler-Benz to protect its interests during the war and to manage the transition to peace was predicated upon collusion in the racial barbarism of the Nazi regime.

THE NAZI MOVEMENT AND MOTORISATION

I would argue that there was an intimate relationship between the Nazi movement and motorisation. It wasn’t just Hitler’s close friendship with Henry Ford, the building of the first motorway network (“autobahnen”), the people’s Car (“Volkswagen”) engineered by Ferdinand Porsche , or the “motorisation of the movement” by the car builders. Outside the USA, the only places where there was a realistic hope of car ownership becoming available to ordinary families by the 1940s were the two fascist countries. The mass motorisation of the western world in the post-war years is prefigured by features of the motorisation in these two countries. There are a number of links between car culture and the fascist movements which can be drawn out, but now is not the place to do so. Suffice it to say that the denial of awkward facts needs to be challenged. This applies whether it is Mercedes-Benz opening up its archives, or road safety professionals questioning the past of their movement’s interventions.

There is a murky history to “road safety” which needs exposure.  The failure to accept that interventions associated with the idiot-proofing of the car and road environments has impacted on the safety of the more benign modes. Considering the movement of these modes out of the road environment as a “good” because there are fewer more vulnerable human beings around to be hurt or killed. Denying the persistent adaptation of human beings to perceptions of risk. Presenting an integral part of  car-dominated transport policies as natural and inevitable. Etc.,etc. Boy racers fronting ludicrous “road safety” campaigns are part of something which has a murky present as well as a past, and it needs to be revealed.