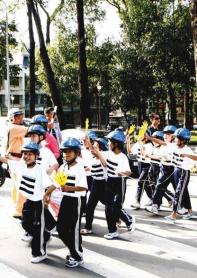 A picture is worth a thousand words, and this one disseminated by the Campaign for Global Road Safety (sic) for the UN Decade for Road Safety is a good indicator of what is wrong with it. Children in South-East Asia show how the CGRS and others behind this initiative think of the basic act of crossing the road: heavily supervised by adults; wearing crash helmets; carrying hi-viz signals; and even tied to each other. This is exactly not what real road safety is about. Let’s look at the origins of the “UN Decade for Road Safety” to learn where this nonsense has come from:Of all the organisations controlling the global “road safety” programmes, the key player is  the FIA Foundation for the Automobile and Society, a UK based charity set up with a basic donation of $300 million made by the Fédération Internationale de l’Automobile (FIA), the federation of motoring organisations and the governing body of world motor sport. This comes from FIA’s sale of  the rights to ‘commercial exploitation’ of Formula One racing to Bernie Ecclestone and his bankers for about $350million plus an undisclosed annual fee. From this fund, itself derived from the advertisers in Formula One, comes the funding for WHO  and World Bank “road safety” initiatives.  Run with some 1.5 million euros a year for administration, the FIA Foundation, as a charity, is a different body from the FIA, although its leading members are often the same people. Trustees include the former FIA President, Max Mosley, the representatives of national motoring organisations, and the Finnish MEP and rally driver Ari Vatanen.

The UN Decade for Road Safety has been signed up to by the “road safety” establishment of bodies like RoSPA, PACTS, BRAKE . We have not. As well as getting the wrong end of the stick on safety, it is part of a programme promoted by powerful bodies committed to increased dominance of road building and motor vehicle use throughout the developing world, with all the health and environmental problems that would bring.

We will be describing this programme – and what’s wrong with it – again.