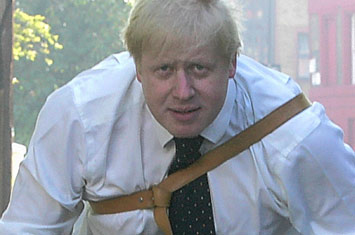 Following the unveiling of the first “Cycling Super Highway” (CSH) in London by Mayor Boris Johnson, the excellent Velorution website declared “Boris is an Ass” http://www.velorution.biz/2010/05/boris-is-an-ass/. . Well, reducing politics to personalities and epithets is not our style.

Also, we would point out that:

Below we review what has been happening in London since Transport for London came into being. The issue is, when the Mayor, GLA and TfL tell us about their apparently wonderful plans for cycling, are we asses to believe them?

So what’s been happening…?

London is apparently going through what is indeed a “cycling revolution”. Flows of cyclists in central London are obviously significantly higher than at the end of the twentieth century. Parts of Hackney resemble Copenhagen. But what exactly has been happening – and why?

The modal share of bicycle trips throughout London* increased by 60% from 2000 to the 2005/08 average. By now (2010) one can say that the share has more or less doubled from 2000 – from 1% to 2%. The modal share of people cycling daily is greater (due to trip “chaining” by motorists and other factors) – up to about 2.8%. Essentially the visible significant increase in central London and a few other locations is balanced out by very low amounts of cycling in Outer London.

More important, the modal share is very low compared not just to towns and cities in Northern Europe (Germany, Netherlands, Denmark, Belgium, Sweden) and elsewhere in Europe (Ferrara, La Rochelle, Graz), but cities in England (Hull, Oxford, York, Cambridge, Bristol). The National Cycling Strategy produced in the 1990s aimed for a quadrupling of levels of cycling throughout England and Wales by 2012, which would have meant at least twice as many people cycling in London as there are now over the next two years.

So much for a “revolution”. But it gets worse: why has the increase taken place? Officially, it is because of the efforts of Transport for London and the London Boroughs (mainly funded by TfL). But there is a more likely reason for at least a large proportion of the increase.

It is one which occurs in road safety and elsewhere where professionals claim credit for changes. Known as “regression-to-mean”, it refers to a change which was due to happen anyway. With cycling modal share, we can point to a typical “underlying average” in northern European cities, including those which have not supported cycling, of some 5%. What has happened in London can at least largely be explained by a spontaneous return to this average.

…and what’s supposed to be happening?

In order to meet the target now held by Mayor Johnson (and set by his predecessor) of 5% of journeys by 2026, the following main strategies have been pursued:

In addition, cycling is supposed to be supported by the Boroughs through their Local Implementation Plans (LIPs); there are the mass participation Skyrides; an initiative on cycle theft, a Cycle Safety Action Plan and general publicity.

So let’s look at the Bike Hire scheme: despite concerns about the (lack of) engineering of roads in central London, we think it looks good. But it aims for 40,000 daily trips, or an increase of less than 10% in the current London total. With success, a spread of the scheme and encouragement to cycle elsewhere, it might generate a 10% increase in cycling – when the Mayor aims for a 150% increase over the next fifteen years.

We would be asses to believe that this will fundamentally alter the modal share of cycling in London, but lets take a look at the other initiatives in the next post…